Sheikh Ali Hajjaj Souissi is one of the most popular Quran readers, he was widely encouraged and he has a great success because of his use of “Maqam Al Saba”, and because of his mastery of the Arabic music theories. As a result, Sheikh Abdul Aziz Harbi named him “the strong throat holder in the Quran recitation”.

Sheikh Ali Hajjaj was born in Cairo, in 1926. His father was the head of the department of the Shari’a court in Cairo.
Since his beginnings, Sheikh Ali was more into the religious and Quranic studies, as he was able to memorize the holy Quran at only the age of ten years old, under the supervision of a very famous “Azhari” scholar, Sheikh “Abou Aziz Al Sahaar”.

In the forties, Sheikh Ali Souisi moved to “Fadel Bacha” mosque, in “Darb Aljamames” in order to complete his Quranic Journey with Sheikh “Muhammad Refaat”, who has the biggest credit for enabling Ali Souissi to master and to perform the Quran “Tajweed” in the religious radio channels and in the Islamic gatherings.

After that, he joined the Institute of Arabic music to study musical theories. His “Tajweed” talent was very obvious and present since his childhood, as he was able to read the holy Quran in a gathering of a group of Yemenis at the age of seven or eight years old. However, he didn’t join the radio field until he reached the age of twenty five years old, in 1951, as he was selected amongst several Quran readers to become an accredited Quran reader in the Egyptian radio channel.

Sheikh Ali Hajjaj Souissi passed away in 2002, at the age of 76 years old. However, he left behind him a tremendous amount of publications and recordings, including a full recorded version of the holy Quran for the benefit of the Egyptian radio channel, alongside with the Saudi and the Kuwaiti radio channels.

It is also noteworthy that Sheikh Ali Hajjaj was honored by the former Egyptian president “Hosni Mubarak”, who awarded him with an “order of distinction” from the first class in 1989. 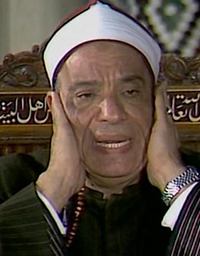