Ahmed Akl… from medicine and surgery to the Tarteel and Tajweed

The Egyptian Quran reader Ahmed Muhammad Akl, with his beautiful and heartfelt voice is taking the listeners to a world of purity and emotions, a world where the listener forgets about the factors of time and place, a place where the heart is pure and where a feeling of reverence is on. Although Ahmed Akl specialized in medicine and surgery, he decided that he wants to be a Quran reciter and to make the holy Quran his companion on this road, so he knocked on the doors of scholars and Sheikhs in order to learn the holy Quran recitation methods, and the rules of Tajweed.

The Quran reader Ahmed Akl was born in June 1987 in the Arab Republic of Egypt, where he continued his primary and university education with great success and great superiority, to crown his educational track by obtaining a bachelor degree in medicine and surgery from Ain Shams University in 2010 with excellence, to prove with that his high intellectual qualities and competences. His family and those around him have a great role in this success and this excellence.

Prior to that, due to his great love for the Holy Quran and his keen interest in learning its rules and reading its rulings, Ahmed Muhammad Akl moved between the hands of many scholars and sheiks seeking for information and knowledge. He was able, thanks to Allah and his dedication, to complete the memorization of the Holy Quran in 2004 under the supervision of Sheikh Tariq Khalil in the Institute of the Holy Quran “Aziz Billah”. After that, he moved to the courses of Sheikh Abdullah Taha and he learned from him the rules of reading and the principles of Tarteel, and he obtained under his supervision a certification according to Hafas Aen Assem’s recitation method, and he also obtained a certification according to Assem from the Sheikh Hassanein Jibril, to conclude his course by getting another additional certification according to the method of Assem from the prominent Sheikh Abdul Basset Hashim.

On the practical level, the reader Ahmed Muhammad Akl occupied some positions and assumed some responsibilities, most notably his work in the field of Imamate in a number of Egyptian mosques. He settled in the mosque Al Salam in Matareya, where he takes the lead during the Tahajud prayers several years ago. His beautiful voice and his mastery of the rules of Tilawat and Tajweed had a big role on his stability in the same mosque and in making him the Imam for more than a decade. 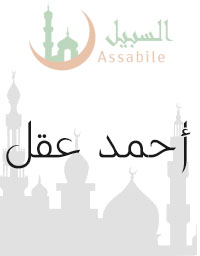 Ahmed Akl
Ahmed Akl… from medicine and surgery to the Tarteel and TajweedThe Egyptian Quran reader Ahmed Muhammad Akl, with his beautiful and heartfelt voice is taking the ...

Ahmed Akl
Ahmed Akl… from medicine and surgery to the Tarteel and TajweedThe Egyptian Quran reader Ahmed Muhammad Akl, with his beautiful and heartfelt voice is taking the ...