Sheikh Abdel Aziz Bin Baz described him by saying “He has several books and publications, and he is known for his immense love towards the kings and the people”. He is Sheikh Ahmed Bin Muhammad Bin Abdullah Bin Moaidh Al Hawashy, one of the most popular and controversial Quran readers and preachers in Saudi Arabia, as he was accused of encouraging terrorism.

Sheikh Ahmad Al Hawashy was born in the Hijry year 1374, in “Al Bahath” village, in “Ahad Rafida” city in the south of Saudi Arabia. His family is very conservative, as he grew up among the preachers and the Quran reciters, which explains his attachment to the religion since his childhood. Sheikhs Suleiman Bin Fayae, Shaher Bin Saeed Al Qahtani, and Mohammad Bin Shayae influenced the most his religious orientation.

Sheikh Ahmad was able to memorize the holy Quran at a young age, and he also learned the Islamic sciences, as well as the Quran recitation and its rules, under the supervision of Sheikh Abdel Majid Al Souri Al Shami and Sheikh Mohammad Al Issa.

Sheikh Ahmad Al Hawashy’s education started in “Al Imam Ahmad Ibn Hanbal” primary school in “Khamis Mushayt”, then”Al Khalidiya” primary school in the same region, he moved after that to “Al Imam Al Bukhari” school where he completed his primary studies before joining the “Islamic Institute” in Abha, where he was surrounded by numerous Sheikhs and Scholars who taught him the principals of the Islamic religion and its sciences.

Following his graduation, Sheikh Ahmad Al Hawashy was appointed as a member in the “committee for the promotion of virtue and the prevention of vice (Saudi Arabia)” for ten years. After that, he took the Imamate of “The Grand Mosque” in the city of “Khamis Mushayt”. He was known for his righteous prayers, as he was described by Sheikh Mohammad Bin Uthaymeen as the closest Imam to “Al Salaf Al Salih” or «the pious predecessors" prayers. He also won the award of the best Imam and preacher in Abha.

After the events of 9/11 in the USA, Sheikh Ahmad Al Hawashy was accused of supporting the terrorist attacks, and he stated “Several persons accused me by saying that my mosque is the source of terrorism, and that my students participated in the 9/11 acts and other acts.” These allegations were completely denied by him.

On Monday, February 28, 2013, Sheikh Al Hawashy dodged a murder attempt. Yet, he lost his son and his daughter in a fire incident, caused by an electrical fault, that Sheikh Ahmed considered a deliberate accident. 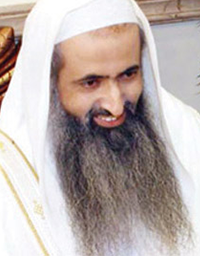 Ahmad Al Hawashy
Sheikh Abdel Aziz Bin Baz described him by saying “He has several books and publications, and he is known for his immense love towards the kings and the people”. ...

Ahmad Al Hawashy
Sheikh Abdel Aziz Bin Baz described him by saying “He has several books and publications, and he is known for his immense love towards the kings and the people”. ...
z