His star emerged in the mid 1940s as a talented reader who did was known for his talent. He chose a different way for him to read and to recite the Holy Quran. His strong voice, notable passion and mastery of the rules and ways of recitation of the Quran helped him sculpt the image he has. He was the first Egyptian Quran reader to have the honor of reciting the Quran in the Al Aqsa Mosque. He visited a large number of Arab countries and on every visit he was well received, with an unmatched amount of respect. Sheikh Abul Ainain Shu Aisha was born in the city of Bella in the governorate of Kafr El Sheikh in the Arab Republic of Egypt on the 12th of August in 1922.

The Quran reciter Abul Ainain Shu Aisha grew up in a very large Egyptian family that contains in addition to his parents eleven brothers and sisters. In this regard, it is said that he was not wanted after his birth because he was the 12th son of his poor parents. But Allah’s wishes and desires wanted the survival of this kid despite the fact that he was unwanted by his parents to become after that the reason for the happiness and wealth, as he took care of his entire family. After his birth by years, and after overcoming the rejection of his family, Sheikh Abdul Ainain joined a Quranic school in his village at the age of six years old and he was able to complete the memorization of the holy Quran at the age of ten years old. After that, his mother enrolled him in the primary school and he learned the Arabic language, arithmetic and others, and thanks to his strong voice and good recitation of the Holy Quran, he was distinguished among his classmates and always the star of the Quranic events and official activities organized by his school. He impressed the headmaster of his school, which made him advice his parents to enroll him in a Quranic school and to surround him by scholars and sheikhs in order to polish his talent and to give him all the means to help him succeed in his life and reach the top. Few years later, he became one of the most prominent and exciting Quran reciters inside and outside Egypt.

A beautiful voice, a heartfelt recitation, and a mastery of the recitation rules are just few of the many factors that made him a success. In 1939 he worked in an Egyptian radio channel, and in 1940 he joined the Near East Radio in Palestine, where he worked as a reader of the Holy Quran. He used the opportunity of being there in order to visit Al Aqsa mosque, and he did recite the holy Quran with his magnificent voice several times. Few years later, he returned to Egypt to hold multiple important positions, as he was appointed as a member of the Supreme Council for Islamic Affairs, as a dean of the International Institute for Holy Quran Memorization, as a member of the Committee for the Test of Readers in the Radio and Television, and a member of the Supreme Committee of the Holy Quran in the Ministry of Awqaf and a member of the mosque building committee in Cairo.

Sheikh Abul Ainain Shu Aisha is one of the most prominent founders of the readers union in Egypt, along with the giants of the Quranic reading and recitation at the time, such as Sheikh Mahmoud Ali Al Banna and Sheikh Abdul Basit Abdul Samad. He has suffered a disease in his voice in the beginning of the sixties, but soon recovered his health to reappear, as he was appointed as a Quran reciter in Omar Makram’s mosque in 1969, and then in Sayeda Zaynab’s mosque in 1992.

Throughout his career, Sheikh Abul Ainain Shu Aisha traveled to a number of countries around the world, and he used his lovely and strong voice in the most famous and popular mosques around the world, such as the Grand Mosque in Mecca, the Al Aqsa Mosque in Palestine, the Umayyad Mosque in Syria and the Islamic Center Mosque in London. Also, he was able to influence a large number of people to convert to the Islamic religion after that they were touched by his heartfelt recitations of the holy Quran. In recognition of his talent and ability, he received a number of awards and decorations, most notably a medal of the Rafidin in Iraq, a medal of Al Arz in Lebanon, and a medal of merit from Syria and Palestine, as well as other medals from Arab and Islamic countries. 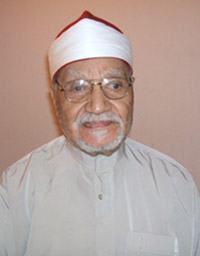 Abul Ainain Shu'aisha
Abul Ainain Shu Aisha, a great path for a devoted Quran reciterHis star emerged in the mid 1940s as a talented reader who did was known for his talent. He chose a...

Abul Ainain Shu'aisha
Abul Ainain Shu Aisha, a great path for a devoted Quran reciterHis star emerged in the mid 1940s as a talented reader who did was known for his talent. He chose a...
z