The Quran reader Abdullah Salah Abou El Fotouh is considered to be one of the most special and outstanding Quran readers in the Islamic world; he has his own voice and a unique character in the Tilawat and Tajweed of the holy Quran. His great passion for the holy Quran and its sciences started from a very early age, and it made him move between numerous Quran memorization schools, where he showed great talent and abilities. Also, he continued his primary and college studies with success, and he received a special teaching and formation in the field of electrical engineering, and he worked for many years in the field of Imamate and teaching, and he contributed in one way or another to share the world of Allah through the holy Quran recitations.

Abdullah Salah Abou El Fotouh was born in Saudi Arabia. During his childhood, he showed great interest in the Holy Quran and an unmatched love for the rules of Tajweed and the rules of recitation. This led his parents to enroll him in specialized schools in the field of the Holy Quran and its sciences, where he received a variety of lessons in this field, honed his talent and contributed to his personal, scientific and literary formation and opened for him the doors of success in the life and afterlife.

And this way, Sheikh Abdullah Salah Abou El Fotouh continued his elementary and preparatory education in the schools of Abu Bakr Al Siddiq to memorize the Holy Quran, where he passed with superiority and he completed the memorization of the holy Quran without problems or difficulties. After that, He received his baccalaureate degree from Al Zahrawi School in Jeddah, Saudi Arabia in 2001, before graduating with a degree in electrical engineering from Cairo University. In addition to that, he obtained a certification in the holy Quran under the supervision of Sheikh Fathi Othman.

After completing his educational career, the Quran reader Abdullah Salah Abou El Fotouh assumed various duties and religious positions in the field of Imamate and teaching. He worked for a period of time as Imam of the Ansar Al Sunnah Mosque in Jeddah, Saudi Arabia, and then he moved to Cairo and worked as Imam in Al Kadhim Mosque, and an Imam in the mosque of Mustapha Al Hamed in the same city. That’s in addition to his work in teaching the Quran, its interpretation and the science of Hadith and Al Fikh for hundreds of young students in the field of Shari’a. 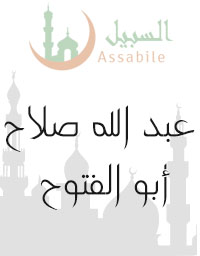