« A Quran reader who has no impact is not one” is a statement that the Quran reader Sheikh Abdullah Ghailan made, and he took it as a rule throughout his professional career. He was different than the other readers by his unique and sweet voice, and by the mastery of the Quranic readings. As a result, he is one of the prominent and well known Imams in Saudi Arabia.

Sheikh Abdullah Bin Mohammed Ghailan was born in the Medina, where he completed all the steps of his academic career. His environment and his family played a major role in determining his personality traits and features, as he grew up in a very conservative family. His father made sure that Sheikh Abdullah learns the Quran at a very young age, by joining the Quranic School, and he was able to fully memorize it by the age of 13 years old.

As soon as he completed memorizing the book of Allah, Sheikh Abdullah Ghailan decided to deepen his knowledge in the field of Quranic readings, and for that, he specialized in this field starting from his secondary school years until he obtained his doctorate degree from the Islamic University in the Medina, from the Faculty of the holy Quran-Ten readings branch.

During his journey on knowledge seeking, Sheikh Abdullah Ghailan was taught under the supervision of many prominent sheikhs, such as Sheikh Abdulrahman Al Hudaifi, on whom he read the Khatm of the Quran and who certified him according to Hafas Aen Assem, and Sheikh Hazem Said Al Kurabi who certified him according to Warash Bin Nafiae, and then Sheikh Mohammad Siddiq Al Maimani and Bakri Al Tarabishi, alongside the Sheikh Lashin Abu Al Farah.

Sheikh Abdullah Ghailan considers that the certifications are one of the most important things that every Quran reader should work hard towards, as it takes a lot of effort and dedication to master the Quranic readings. Thanks to his persistence and to his ability to learn, he was able to obtain numerous certifications including those related to the ten readings.

Thanks to his outstanding voice that was given to him by Allah, and to his knowledge, Sheikh Abdullah Ghailan was able to make for himself a very large fan base and a good reputation in Saudi Arabia. He takes the Imamate in many mosques in the Medina, and also in many international Islamic centers during Ramadan. Also, he has a collection of audio recordings that is broadcasted in the Quran readings channels, and he also supervises the memorization of the Quran in Dar Al Zikr center in Saudi Arabia. 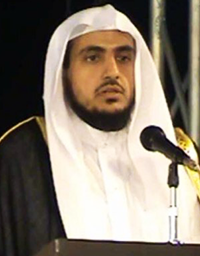