I am Abdo Fuda El Sharkawy, the humble person who is seeking the forgiveness of the Almighty Allah. I was born on Monday, the 30th April 1945, corresponding to the 17th of Jumada the first 1364 Hijr, in the village “Al Safia” in the governorate of Kafar Al Sheikh, and I was told 2 years after my birth I lost the blessing of vision, and my father oriented me at the time towards the memorization of the holy Quran under the supervision of the Sheikhs in the village, and he wanted me to become a very popular Quran reader, the thing that I achieved.

I worked as a teacher of Arabic language at Al-Azhar institutes. During my teaching career, I joined the Damanhur Readings Institute in 1997 and got the high readings certification in 1999. Then I moved to the reading specialization phase in the same Institute and I received its certification thanks to Allah and to my efforts, and I ranked the second between the blind students on the level of the whole Egyptian country. Then I moved to the Faculty of the Holy Quran and its Sciences in Al Azhar University in Tanta and I got the high leave certificate in 2008.

In the course of my studies at the Institute of Readings, I read the Holy Quran with the ten minor readings of the path of Al Shatibiya and Al Durra, and then according to the ten major readings from the path of Taiba Al Nachr-Ibn Al Zajri- and I received a certification of the ten minor and major reading methods from the Sheikh Zakaria Bin Muhammad Bin Ali Abdulsalam, in the 3rd of Rajab 1425Hijr, corresponding to the 19th August 2004.

In 1964, I had the chance and opportunity to read with the Sheikh Mohammed Abdulaziz Hisan in one night and he recognized me and gave me an advice, and that’s not to let my readings in the ceremonies and events interfere with the seeking of knowledge. Being a popular Quran reader and getting paid for attending those events should not stop me from learning and he told me that he reached a high degree and status and money, but he feels in himself some kind of deficiency because he didn’t focus on learning more and he only gave time to memorizing the holy Quran and learning the readings. So I kept his advice and I had implemented it according to my best ability.

In 1978, I applied to the radio channel in order to make it amongst their Quran reciters, and I was tested in the Quran and its recitation by the Sheikh Rawk Khalil Haba may Allah have mercy on him, and he confessed to me that I was excellent and he made me a Quran reader, but the committee of voices denied me and told me to work on my voice according to their standards in order to be accepted, after six months of hard work, I came back to them but I didn’t seem to interest them because of the big role that the recommendations and favors play in the domain, as they asked for money and I can’t stand corruption.

Since the purpose of my application to this radio channel was to serve the holy Quran and share it, the idea of recording an audio came to me, so I recorded the Khatma of the holy Quran, according to the recitation method of Hafas Aen Assem in the studio of the Sound of the Quran in Tanta in 2014, and I finished it in 2015. Here I am today working as a Quran professor and reader of its ten minor and major readings, and I also work as a Sheikh in the village of Al Safia in the ministry of Awqaf. 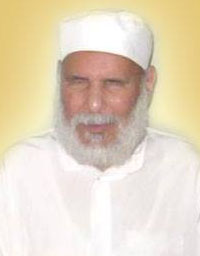