Moneim Abdel Mobdi Abdel Moneim, known by Sheikh “Abdel Moneim”, is one of Egypt’s most prominent and talented Quran readers and calligraphers. He was born in the Egyptian province “Port Said” in 1957.

Sheikh Abdel Moneim continued his educational path in Egypt, where he specialized in a variety of fields, including the transactions sciences and the Shari’a sciences. He obtained his bachelor degree in the business and administration specialty, branch of accounting, from the University of “Suez Canal”, as well as a bachelor degree in the Islamic Shari’a in 1995 from the Islamic University of Imam Muhammad Bin Saud; however, he wasn’t able to complete the memorization of the holy Quran up until the age of 24 years old in 1981. Besides that, he is currently studying for a pre-master’s degree at the American Open University of Islamic sciences and Shari’a.

Concerning his professional career, he began as a preacher in 1976, and he mastered and innovated in the art of giving speeches and lectures. He joined after that the United Arab Emirates (UAE) in 1990 in order to work as an Imam and a preacher in the mosque of Selman Al Farisi, a job that he is still doing. 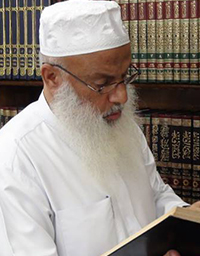